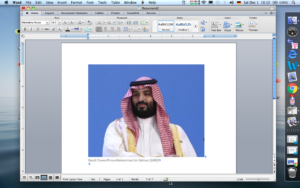 Saudi Crown Prince Mohammed bin Salman (MBS) sent 11 messages to his closest adviser, who reportedly oversaw the operatives who killed journalist Jamal Khashoggi, in the hours before and after the journalist’s murder on October 2, according to a Wall Street Journalreport.

‘Tell your Boss deed is done’

Composer (New Music), writer.
View all posts by iraj →
This entry was posted in Khashoggi's Killing. Bookmark the permalink.