Iranian human rights lawyer Nasrin Sotoudeh has been sentenced to an extra 10 years in jail on top of the five-year term she is already serving, her husband said Tuesday. 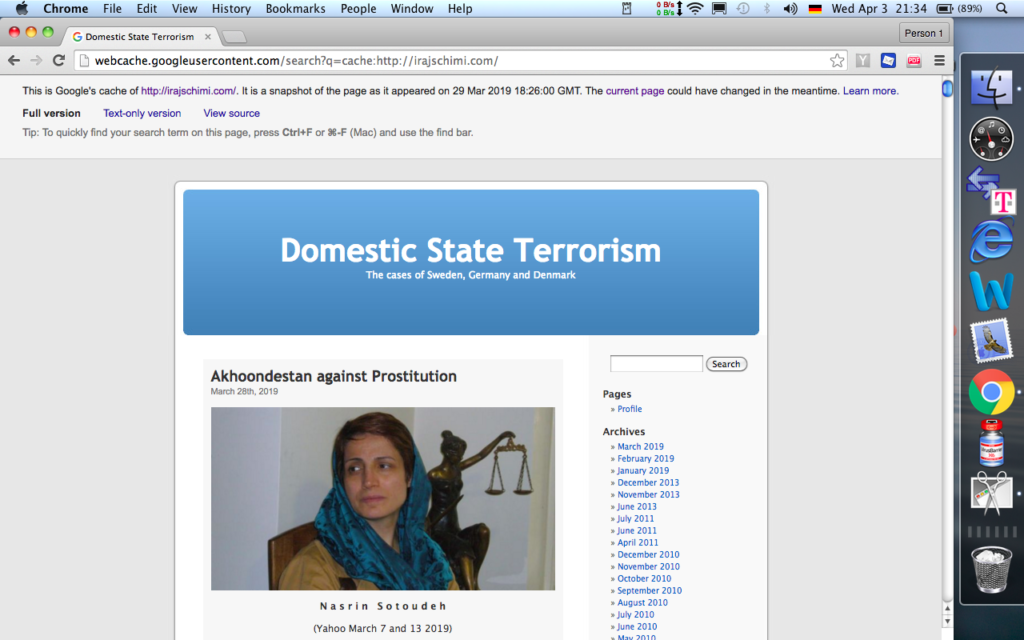 The charges range from her membership to a human rights group to “encouraging corruption and prostitution”.

‘Men can dispose of their violence more efficiently if they regard the process not as something emanating from within themselves, but as a necessity imposed from without, a divine decree whose least infraction calls down terrible punishment’ (René Girard: Violence and the Sacred).

Sotoudeh’s conviction was not immediately reported by Iranian state-run media… The Center for Human Rights in Iran relied on information about Sotoudeh’s case provided by her husband Reza Khandan, who separately faces a six-year prison sentence over providing updates on her case… Her detention in part relates to her defense of women who protested the mandatory hijab… One of Sotoudeh’s clients in the hijab protests received a 20-year prison sentence…

She ‘was arrested last June and told she had been found guilty in absentia of espionage charges and sentenced to five years. The new 10-year sentence was the longest of seven different verdicts totalling 33 years bundled together…, according to her husband Reza Khandan.

“But only the longest sentence will be served, which is ‘encouraging corruption and debauchery [debauchery: ‘excessive indulgence in sex, alcohol, or drugs’ (dictionary)], and providing the means’, he told AFP by telephone.
He said Sotoudeh had also been sentenced to a total of 148 lashes for appearing in court without the hijab Islamic head covering and for another offense. She had been found guilty of “colluding against the system, propaganda against the system… disrupting public order” and several other counts”.

Amnesty International condemned the latest case against Sotoudeh as an “outrageous injustice” and called for her immediate and unconditional release. “Nasrin Sotoudeh has dedicated her life to defending women’s rights and speaking out against the death penalty — it is utterly outrageous that Iran’s authorities are punishing her for her human rights work,” it said. 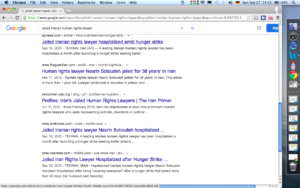 From Wikipedia, the free encyclopedia

Although Iranian authorities insist that her death was accidental and that she died of a stroke while being interrogated.

The story did not become a major controversy until almost two years later, when Shahram Azam, a former staff physician in Iran’s Defence Ministry, released a statement saying that he examined Kazemi in hospital four days after her arrest and found obvious signs of torture, including:

One of the two Iranian intelligence agents charged with her death was acquitted in September 2003. The other agent, Mohammed Reza Aghdam-Ahmadi (محمدرضا اقدم احمدی), was charged with “semi-intentional murder” and his trial opened in Tehran in October 2003. In the same month, the Iranian parliament condemned Saeed Mortazavi, a Tehran prosecutor, for announcing that Kazemi had died of a stroke. On July 25, 2004, Aghdam-Ahmadi was acquitted.[citation needed]

The hijab has been legally required for women’s dress in Iran since the 1979 revolution. Some women have challenged the authorities in recent years by wearing loose headscarves, or by discarding the hijab entirely at public demonstrations.

Punishment for women without the headscarf is severe. Earlier this year, Nasrin Sotoudeh was sentenced to 38 years in prison and 148 lashes for defending women who peacefully protest the regime’s repressive hijab laws.

Other women in Iran were recently charged with “inciting prostitution” for not wearing headscarves, with Amnesty International describing a “worrying trend of crackdowns against women human rights defenders in Iran.”

The 17-year-old cousins were executed on April 25 at a prison in the southern city of Shiraz “following an unfair trial,” Amnesty said. The teens who had been convicted on multiple rape charges were arrested in 2017 at the age of 15 and were held for two months at a police detention center “where they said they were beaten,” according to Amnesty. They had no access to legal representation and did not know they had been sentenced to death until “shortly before their executions.” Their bodies also showed lash marks, showing that they had been flogged prior to their deaths. Families kept in the dark. On April 24… the pair’s families were allowed to visit them but were not informed “that it was in preparation for their execution.” The relatives were only informed of the executions the next day, when they were told to collect the bodies…

Amnesty International criticized the country for its “utter disdain for international law and the rights of children.”

“The Iranian authorities have once again proved that they are sickeningly prepared to put children to death, in flagrant disregard of international law… The use of the death penalty against people who were under 18 at the time of the crime is strictly prohibited under international human rights law and is a flagrant assault on children’s rights,” Philip Luther, Amnesty’s Middle East and North Africa Director, said. “We have identified a trend in which Iran’s authorities are carrying out executions of juvenile offenders in secret and without giving advance notice to the families, seemingly in a deliberate attempt to avoid global outrage,” Luther added.

According to a 2019 report by Amnesty, Iran is the world’s top executioner of juveniles.

Iran has executed at least 12 child offenders since the start of 2018 while at least 90 are currently sitting on death row awaiting their punishment, the United Nations has heard.

Among the world leaders in execution, Iranian courts bestowed the penalty on at least 253 people last year.

Now an assessment made by the UN’s special investigator on human rights in Iran, Javaid Rehman, has revealed seven of those killed by the state in 2018 were child offenders – in breach of international law but in keeping with the country’s legislation.

In Iran the death penalty can apply to children as soon as they are deemed to have reached maturity – for boys as young as 15 and girls as young as 9.

Meanwhile crimes judged under qisas, or retributive ‘eye for an eye’ justice, carry the same sentences for all – meaning child offenders can be punished with death for the crime of murder.

Among those to be put to death in 2019 was Zeinab Sekaanvand, who became the fifth execution of a child offender this year on 1 October.

Convicted of murdering her husband at age 17, her detention and trial were marred by claims she was a victim of domestic violence, and had been forced to make a false confession while she was denied access to a lawyer.

Mr Rehman said he was “alarmed” by her execution, adding that her trial raised “numerous due process concerns.”

He added that he “appealed to the Iranian authorities to abolish the practice of sentencing children to death, and to commute all death sentences issued against children in line with international law.

In total 21 children have been sentenced to death since 2013, when the law was adapted to give judges the discretion to exempt children from the death penalty if they did not understand the nature of their actions.

Commenting on the execution of Ms Sekaanvand earlier this month,Michelle Bachelet, the UN High Commissioner for Human Rights said the “sheer injustice” of the case was “deeply distressing”. She added: “The bottom line is that she was a juvenile at the time the offence was committed, and international law clearly prohibits the execution of juvenile offenders.”

‘… encouraging and providing for (moral) corruption and prostitution.’

Iran must free women held over veil protests: UN experts… The UN experts said arrests of women’s activists have risen in recent weeks in Iran, where the government issued an official warning that those who do not wear a veil will face severe punishment

GENEVA: A group of UN human rights experts on Friday called for the immediate release of three Iranian women given long jail terms for protesting laws compelling women to wear veils.
The trio were charged after a video posted online showed them handing out flowers on Tehran’s metro on March 8, International Women’s Day, according to a statement co-signed by five UN special rapporteurs and another expert.
The women — named in the statement as Mojgan Keshavarz, Yasaman Aryani and Monireh Arabshahi — were not wearing veils.
They “peacefully protested against Iran’s compulsory veiling laws and advocated for a woman’s right to choose whether or not to wear the hijab,” the statement said.
According to the experts, who are independent and do not speak for the world body, the women were detained in April, “forcibly disappeared” for up to two weeks, and denied access to a lawyer through the initial investigation.
“Their legal representatives were also reporte

Keshavarz has been sentenced to 23-and-a-half years in prison while Aryani and Arabshahi were both given 16-year terms for handing out flowers on Tehran’s metro on March 8, International Women’s Day.

“Their legal representatives were also reportedly prohibited from representing them at their trial,” the statement said.

.
Keshavarz has been sentenced to 23-and-a-half years in prison while Aryani and Arabshahi were both given 16-year terms.
All were convicted of national security violations, spreading anti-state propaganda and “encouraging and providing for (moral) corruption and prostitution,” the UN experts said. Keshavarz was convicted of the additional crime of “insulting the sacred.”
“We call upon the Iranian authorities to quash these convictions and immediately release all human rights defenders who have been arbitrarily detained for their work in advocating women’s rights,” the statement said.

TEHRAN: Iran’s judiciary on Sunday sentenced a journalist to two years in jail for “spreading misinformation” and “insulting” the country’s supreme leader and authorities, his lawyer told state media.
Masoud Kazemi was also banned from “media activities” for two years, the lawyer Ali Mojtahedzadeh said, quoted by the official news agency IRNA.
The report did not specify the cause of the charges against Kazemi.
State-run Iran newspaper reported on May 23 that he had been arrested the day before.
The journalist was a reporter for the reformist daily Shargh and also the editor-in-chief of Seda-ye Parsi monthly magazine, the semi-official ISNA news agency reported.
Before the trial, the court set bail at 10 billion rials (about $74,000 at the current open market rate) in the case over charges of “conspiring against national security,” the lawyer said.
“Fortunately this charge was dropped during the trial… (and) considering the current charges in the indictment we hope the bail is reduced and he can be freed,” Mojtahedzadeh added.
Another journalist, Pouyan Khoshhal, was arrested in October over “insults” against Imam Hussein, one of the most revered religious figures in the Shiite Islamic republic.
And in August journalist Mir Mohammad Mir-Esmaili was sentenced to 10 years in prison over insulting Imam Reza.

Yahoo Nov 13 2019 Thousands of protesters marched in the streets of Ahwaz city in Iran during the funeral procession held for a young dissident poet who died the previous day in an Iranian hospital under suspicious conditions. The protesters chanted “in spirit, and in

Composer (New Music), writer.
View all posts by iraj →
This entry was posted in Ö Zusatz 2 New. Bookmark the permalink.